Peele Castle in a Storm 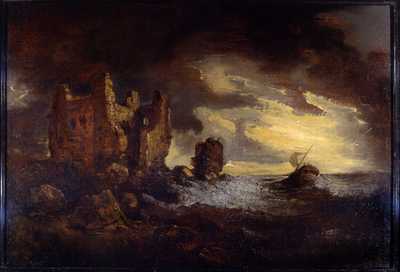 Sir George Beaumont painted this scene of Piel Castle for William Wordsworth, who was devastated by his brother John's death at sea. John Wordsworth was captain of the East Indiaman Earl of Abergeavenny and perished when the vessel sank during a storm off the Isle of Portland in Weymouth Bay in 1805.

This painting was the inspiration for William Wordsworth's poem "Elegiac Stanzas."

The original painting is owned by Dove Cottage and the Wordsworth Museum; the image is available here through ArtUK.

CC BY-NC-SA This image is available to be shared and re-used under the terms of the Creative Commons Attribution-NonCommercial-ShareAlike licence.