The Loss of the Abergavenny, East India Man, off the Isle of Portland 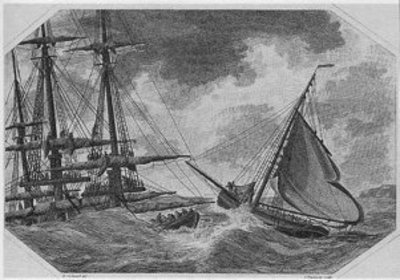 Engraving by Richard Corbould used as the frontispiece for the pamphlet "An Authentic Narrative of the Loss of the Earl of Abergavenny, East Indiaman, Captain John Wordsworth, off Portland, on the Night of the 5th of Feb. 1805; drawn from official documents and communications from various respectable survivors." By a Gentleman in the East-India House (London: Minerva Press, 1805). The image which depicts the sinking of the East Indiaman, the Earl of Abergavenny captained by John Wordsworth, the brother of the poet, William Wordsworth. The original is located at the National Maritime Museum in London, England. A higher resoltion image is available at http://collections.rmg.co.uk/collections/objects/110519.html#zkCyM2OA3x9Dy6pH.99