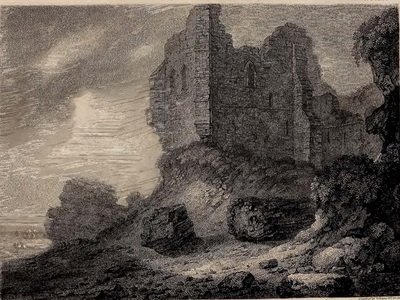 Engraving of Piel Castle from Vol. 1, Antiquities of Great Britain, illustrated in views of monasteries, castles, and churches, now existing, engraved from drawings by Thomas Hearne. London : Printed by James Phillips in George-Yard, Lombard-Street, and published by the proprietors T. Hearne and W. Byrne, MDCCLXXXVI [1786]. Plate 42.

Piel Castle, also known as Peel Castle, is a restored castle from the early 14th century located on Piel Island, off the coast of north-west England. William Wordsworth associated the castle with the tragic death of his brother, John, who was serving as captain of the Earl of Abergavenny when it was shipwrecked in 1805.

A painting of the castle by Sir George Beaumont was the inspiration for William Wordsworth's poem "Elegiac Stanzas."