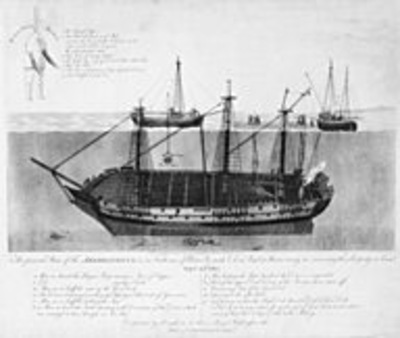 Print depicting the exploration of the wreck of Earl of Abergavenny, with legend and the image of Tonkins diving machine.

On its fateful, final journey, the Abergavenny was the richest vessel of the East India Company ever to set sail for India, with cargo valued at over 200,000 pounds sterling and with more than 275,000 ounces of silver dollars. After Captain John Wordsworth (brother of poet,William) suffered two financially disastrous voyages, this third voyage was his grand and probably final opportunity to recover all that he and his investors had lost, as well as to make a handsome profit for his brother and sister, who invested almost everything they had in his final journey.

In this rendering of the cargo salvage operation, we see that there are, from left to right, a sloop with a winch raising a box of copper, two groups of men operating two saws probably to open up the ship for an easier reclamation of cargo, and a diver on the far right in the sunken vessel, who is attaching cargo to a line and, in a caption balloon, shouting, "Haul up," through his breathing tube. The diver is in a Tonkin's diving machine, which is illustrated in the upper left side of the lithograph. Contemporary salvage operations to recover artifacts form the Abergavennyhave been conducted as late as 2005.

The original is located at the National Maritime Museum in London, England. A higher resolution image is available at http://images.rmg.co.uk/en/search/do_quick_search.html?q=PY8452.