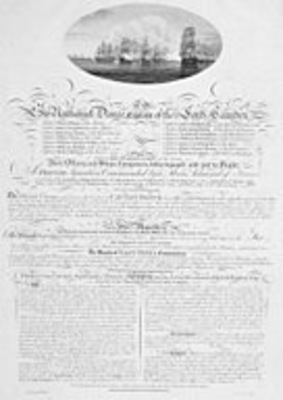 Commemorative poster honoring the captains of the East India convoy that thwarted a French squadron seeking to destroy and pillage them by feigning they were warships of the Royal Navy. The citation confers knighthood on Captain Nathaniel Dance for his efforts.

The name of John Wordsworth, brother of poet William Wordsworth, appears at the top of the second column of names as Captain of the Earl of Abergavenny. Captain Wordsworth perished a year later, when the Abergavenny was wrecked off the coast of England in 1805.

The original document is located at the National Maritime Museum in London, England. A higher resolution image is available at http://images.rmg.co.uk/en/search/do_quick_search.html?q=PY8009 .